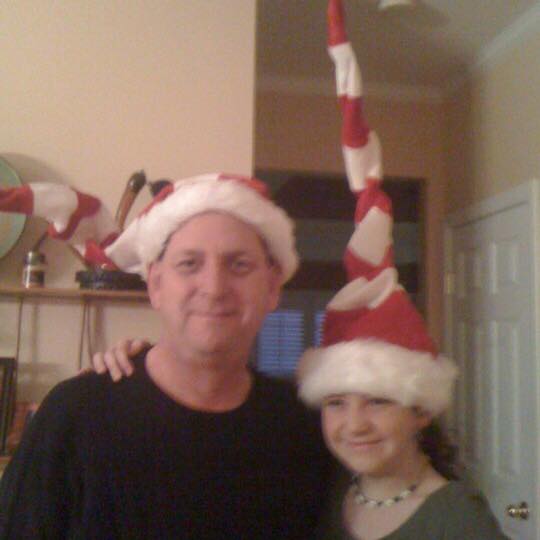 I wrote this post in 2009. My kids are all grown now, but the memories are priceless.

I typically blog about technology product management and mergers/acquisitions. Today I’d like to write about something a little more holiday-centric – the Santa Hat Believer’s Club.

I have loved the Christmas season since I was a child. Even as I approach the ripe age of 50 60 it is my favorite time of the year. I remember to this day almost every Christmas from when I was a child. My parents had a set of wonderful holiday traditions and regardless of the situation we were in, our family always had a great Christmas season. Even when I was an adult, my father maintained a gift-giving tradition that traced back to my youth. Every Christmas he gave my brothers and I new socks, a ball, a book, and a game for Christmas. It was certainly a bit corny, but it was just one of those simple traditions we enjoyed at Christmas time.

In 2001 I started a Christmas tradition of my own that has become known as the Santa Hat Believer’s Club. The rules of the club are pretty simple. Starting the day after Thanksgiving through Christmas Day, I wear a Santa Hat every time I leave the house, regardless of where I am going. Also, all of the stations on my car radio are set to the station that plays Christmas music 24 hours a day. Finally, I end every discussion with someone I meet or talk to with either a Merry Christmas or Happy Holidays as appropriate. Two other members of the club, my daughters Marisa (11 – now 22) and Jackie (9 – now 21) do the same thing. My 12 (now 24) -year-old daughter Lily has been a card-carrying member for years but decided that in the 7th grade it wasn’t too cool to be seen wearing a Santa hat to school every day for a month.

Why Does the Santa Hat Believer’s Club Exist?

So why do I do this? I may be an incurable romantic but in the United States, the time between Thanksgiving and Christmas is perhaps the only time in the year when everyone at least tries to set aside their worries and concerns and celebrate the season, their faith, friends, and family.  Random acts of kindness abound and charity and gift-giving are the norm, versus the exception.  I enjoy when people chuckle and smile at me when they see me and my children wearing our Santa hats when we are stopped in traffic or we are cruising the aisles at the local grocery store.  More than one person has stopped us and asked about our hats and the ‘Club’ and a few of them vow to adopt the tradition as well. Wearing the ‘Hat’ helps to remind me to celebrate the season every day

Yes Virginia, there is a Santa Claus

Perhaps nothing sums up better the philosophy of the Santa Hat Believer’s Club than a story from 102 years ago – the infamous ‘Yes Virginia, there is a Santa Claus’. According to Wikipedia “In 1897, Dr. Philip O’Hanlon, an assistant on Manhattan’s Upper West Side, was asked by his then eight-year-old daughter, Virginia (1889–1971), whether Santa Claus really existed. Virginia O’Hanlon had begun to doubt there was a Santa Claus, because her friends had told her that he did not exist.  Dr. O’Hanlon suggested she write to the New York Sun, a prominent New York City newspaper at the time, assuring her that “If you see it in The Sun, it’s so.” While he may have been passing the buck, he unwittingly gave one of the paper’s editors, Francis Pharcellus Church, an opportunity to rise above the simple question, and address the philosophical issues behind it.”

Here’s the editorial that Church ran on the front page:

“DEAR EDITOR: I am 8 years old. Some of my little friends say there is no Santa Claus. Papa says, ‘If you see it in THE SUN it’s so.’ Please tell me the truth; is there a Santa Claus?”

“VIRGINIA, your little friends are wrong. They have been affected by the skepticism of a skeptical age. They do not believe except [what] they see. They think that nothing can be which is not comprehensible by their little minds. All minds, Virginia, whether they be men’s or children’s, are little. In this great universe of ours, man is a mere insect, an ant, in his intellect, as compared with the boundless world about him, as measured by the intelligence capable of grasping the whole of truth and knowledge.

Yes, VIRGINIA, there is a Santa Claus. He exists as certainly as love and generosity and devotion exist, and you know that they abound and give to your life its highest beauty and joy. Alas! How dreary would be the world if there were no Santa Claus? It would be as dreary as if there were no VIRGINIAS. There would be no childlike faith then, no poetry, no romance to make tolerable this existence. We should have no enjoyment, except in sense and sight. The eternal light with which childhood fills the world would be extinguished.

Not believe in Santa Claus! You might as well not believe in fairies! You might get your papa to hire men to watch in all the chimneys on Christmas Eve to catch Santa Claus, but even if they did not see Santa Claus coming down, what would that prove? Nobody sees Santa Claus, but that is no sign that there is no Santa Claus. The most real things in the world are those that neither children nor men can see. Did you ever see fairies dancing on the lawn? Of course not, but that’s no proof that they are not there. Nobody can conceive or imagine all the wonders there are unseen and unseeable in the world.

You may tear apart the baby’s rattle and see what makes the noise inside, but there is a veil covering the unseen world which not the strongest man, nor even the united strength of all the strongest men that ever lived, could tear apart. Only faith, fancy, poetry, love, romance, can push aside that curtain and view and picture the supernal beauty and glory beyond. Is it all real? Ah, VIRGINIA, in all this world there is nothing else real and abiding.

Please accept my best wishes for a Merry Christmas, Happy New Year, or Happy Holidays as the case may be. I encourage you to take out a trial membership in the Santa Hat Believer’s Club. Dig out your Santa hat and wear it around town for an afternoon and see how many smiles and chuckles you can create.

With SaaS Valuations Returning to 2018 Levels, Is Now the Time to Buy?