How Has Technology Adoption Life Cycle Been Shortened in 2021? 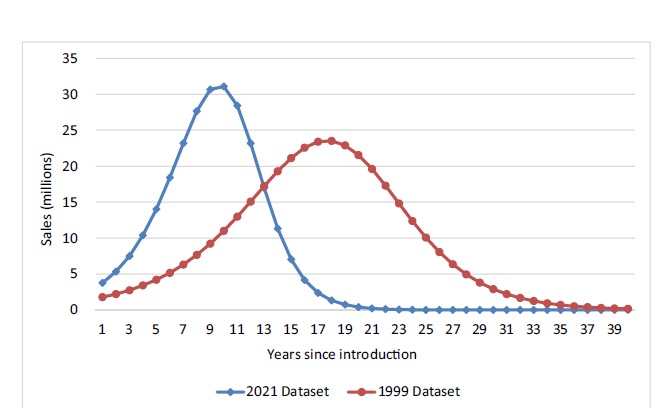 Marc Andreessen, the co-founder of Netscape and half of the famous venture capital firm Andreessen-Horowtiz said in 2003 “Any new technology tends to go through a 25-year adoption cycle”  Last year Quibi, which delivered in 10-minute episodes called “quick bites ”launched in March and shut down in October.  Quibi raised $1.75 billion.  Recently a debate between a VC and Geoffrey Moore of Crossing the Chasm fame. The debate was that the seminal work on software technology adoption life cycle was overdue.  Moore disagreed with the VC, but there is little doubt that the technology adoption life cycle has been shortened in 2021.

The Technology Adoption Life Cycle is a staple of modern software marketing.  The concept was first presented in 1957 in a paper entitled The Diffusion Process by agricultural researchers Beal and Bohlen in 1957.  Geoffrey Moore popularized the concept for software businesses in his 1991 book Crossing the Chasm.

The process of adoption over time is typically illustrated as a classical normal distribution or “bell curve.”

In his book Crossing the Chasm, Moore argued that there is a chasm between the early adopters of the product (the technology enthusiasts and visionaries) and the early majority (the pragmatists). Moore believes visionaries and pragmatists have very different expectations, and he attempts to explore those differences and suggest techniques to successfully cross the “chasm,” including choosing a target market, understanding the whole product concept, positioning the product, building a marketing strategy, choosing the most appropriate distribution channel and pricing.

Jeff Bussgang, a co-founder and General Partner at Flybridge Capital, recently argued that it is time to refresh our thinking about the Cham:

“VCs have dramatically underestimated the size of Serviceable Addressable Markets (SAMs) for their startup investments in recent years because they have “been trained to believe that because of the divide, only part of the SAM will be available in a reasonable window of time”.

The gap is no longer the barrier it once was because companies finally understand that software is eating up the world.

As a result, the early majority have partnered with the innovators and early adopters to create an expanded early market. In fact, they have left the mainstream market to cross the divide the other way, leaving only the late majority and the laggards on the other side.

Because of this, we are now seeing several cases of very large, high-growth markets with seemingly unlimited upside potential. There isn’t an abyss to cross much later in the life cycle, and it’s not worth much of the effort to cross then.”

After 30 years, ‘Crossing the Chasm’ is due for a refresh

“The pandemic helped accelerate a global appreciation that digital innovation was no longer a luxury but a necessity. As such, companies could no longer wait around for new innovations to cross the chasm. Instead, everyone had to embrace change or be exposed to an existential competitive disadvantage.

The key here is to understand the difference between two purchasing decision processes.  One is governed by visionaries and tech enthusiasts (early adopters and innovators), the other by Pragmatists (The Early Majority).”

Forego the abyss? No way! – TechCrunch

The Timescale of the Technology Adoption Life Cycle is Shrinking

While Bussgand and Moore may be both right, there is no doubt that the timescale of the technology adoption life cycle is shrinking.  The time to reach 50% saturation (Early Majority) is shrinking rapidly.  As Forbes reported:

Academic researchers Gil Appel and Eitan Muller published a paper in 2021 entitled Adoption Patterns over Time: A Replication, In the paper they compared the pace of technology adoption in 1999 versus 2021.  They summarized their results in this graph:

Adoption Patterns over Time: A Replication,

The paper reinforces what people intrinsically know – the pace of technology adoption is increasing.  As CB Insights reported, the amount of time a between when a tech company is declared a unicorn and its IPO is shrinking:

The case of Quibi is an example of how technology can go from the visionary stage to laggard in a matter of months.  According to Three Startup Failures Product Managers Can Learn From

Quibi was founded in 2018 by Jeffrey Katzenberg, the former CEO of Walt Disney.  Meg Whitman, the former political candidate and CEO of HP Enterprise became Quibi’s CEO in January 2018.  Quibi targeted a younger demographic, with content delivered in 10-minute episodes called “quick bites” (with the name Quibi derived from “QUI-ck BI-tes.  Quibi raised $1 billion from major Hollywood studios and later $750 million from private equity investors.  Quibi spent over $1 billion on content for its new platform.  Quibi’s short-form mobile streaming platform was intended to be a disruptor to the streaming space, a revolutionary competitor that offered scripted and reality television in bite-size chunks from A-list actors, writers, directors, and producers.

Quibi launched in April 2020.  According to MediaPost “Mobile app tracking/analytics firm, Sensor Tower shows Quibi reached the fourth most-downloaded iPhone app on its launch day but is down to #78 as of today.  Analytics firm App Annie also shows Quibi having debuted at #4 in the Apple App Store, and reported that it was down to #71 as of April 16.

On October 21, 2020, just six months after Quibi’s launch, The Wall Street Journal reported that the streaming service was shutting down.   Later, that same day, this news was confirmed by both Katzenberg and Whitman. Katzenberg told Deadline Hollywood, “There was no question that keeping us going was not going to have a different outcome, it was just going to spend a whole lot more money without any value to show for it. So, out of respect for these people that put up this extraordinary amount of capital to do it, that’s irresponsible and we both felt we shouldn’t do it.” In the interview, Katzenberg also cited the unfortunate timing of the launch during the pandemic as a contributing factor.

Clubhouse, the pandemic darling seems headed to a similar fate:

In June, buoyed by its launch on Android in the last week of May, Clubhouse clocked 5.9 million app downloads in India across Apple Store and Play Store. This plummeted to 1.4 million in July, as per data from Sensor Tower, a mobile app analytics firm. In August, app installs stood at 558,000, an almost 60% drop compared to the previous month. Clubhouse’s daily active users on Android devices in India stood at 1.26 million in August, 46.75% less than July, according to data from Similarweb, a web analytics platform.

Why is the Timescale of the Technology Adoption Life Cycle Shrinking?

The simple answer is SaaS.  SaaS has become the dominant force in enterprise technology.  As IDC reported:

SaaS dramatically lowers the total cost of ownership and operations in comparison to on-premise software implementations.  With on-premise solutions your enterprise is responsible for:

SaaS delivers these same services for a fraction of the cost.

The dominant pricing model for SaaS is a subscription.  This dramatically lowers the upfront and ongoing costs for enterprise software applications.  On-premise apps are predominantly sold via a perpetual license.  This requires a large upfront payment and ongoing maintenance fees.  Subscription arrangements are often month-to-month and based on the number of active users and specific modules required.  Salesforce.com is the king of offering multiple pricing plans based on a customer’s specific needs.  They have over 60 pricing plans.

SaaS applications can be implemented rapidly.  If you want, you can implement Salesforce.com in a matter of days.  While complex enterprise-scale implementations might take a month or two, it is nothing in comparison to what was required to implement on-premise software packages. A classic example is the UK supermarket chain Lidl’s cancellation of an SAP implementation – 7 years after it started and having spent €500 million.

SaaS has fundamentally changed the technology adoption life cycle for software.  What Marc Andreesen said took 25 years to accomplish is now happening in less than a decade.  The birth, rise, and demise of new software technologies can now be measured in months instead of decades.