Is This the Start of an NFT Bubble? 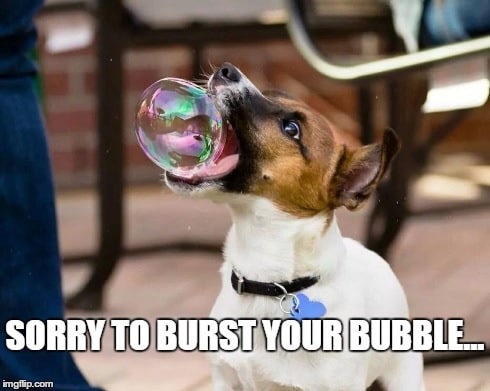 Non-Fungible Tokens (NFTs) are a fascinating phenomenon. Kevin McCoy and Anil Dash are credited with creating the first NFT in 2014 – Quantum. Sotheby’s sold it at auction for $1.472 million. OpenSea, the leading NFT marketplace, moved $5 billion of NFTs in January. The best day was January 31 when they sold 233 million, or over $10 million an hour. After surviving the DotCom bubble of 2000, the housing bubble (2008), and the Bitcoin bubble of 2018 are we witnessing the start of an NFT bubble?

In this article we will cover:

What is an NFT?

A non-fungible token (NFT) is a non-interchangeable unit of data stored on a blockchain, that can be sold and traded.. NFTs are digital files such as photos, videos, and audio. Because each token is uniquely identifiable, ERC-721 tokens are one of the most popular ways to store NFTs on the Ethereum blockchain. An ERC-721 token consists of a number of functions and methods to define a smart contract that is stored on the blockchain. Smart contracts make it possible to have permanent identification information. They also ensure that NFTs cannot be divided into smaller units to be sold. Also, the smart contract can ensure that the digital assets are one-of-a-kind and non-replicable. This makes the NFTs scarce and rare which is the reason why NFTs have value. Virtually anything can be represented digitally on the blockchain.

NFT sales are exploding. OpenSea, which controls over 90% of the NFT market, posted over $5 billion in NFT sales in January 2022 alone. Other marketplaces like CryptoPunks/Larva Labs. Rarible, and Nifty Gateway posted outstanding results as well. Coinbase plans on launching its own NFT marketplace soon.

The most expensive NFT sold to date is The Merge by Pak. On December 2, 2021, Pak launched the sale of “Merge” on Nifty Gateway. “Merge” was made available for 48 hours, with buyers able to purchase “mass units” rather than individual copies of an NFT edition. Buyers received a single NFT with its associated image generated based on the transaction metadata and the number of “mass units” purchased. A total of 312,686 mass units were sold to 28,983 buyers during the initial two-day sale generating $91.8 million in revenue.

Other recent mega-deal NFT sales include:

Why Are Some NFTs More Valuable Than Others?

An NFT is a token recorded on a blockchain referencing a digital file. Like other collectible items (paintings, sculptures, stamps, coins, Beanie Babies) some items are considered to be more valuable than others. Factors that can influence value include aesthetic appeal, the reputation of the creator, and scarcity. The Mona Lisa by Da Vinci may not be the most beautiful painting in the world, but it is insured for over $100 million. Whenever I visit Paris I try and squeeze in some time to visit the Louvre. I spend hours walking through the galleries and admiring the artwork. I first saw the Mona Lisa in 1978 when I was an exchange student living in Belgium. When I finally worked my way to room 711 I was a little disappointed by the small picture behind a foot of glass. Over the years my work brought me frequently to Paris. I’ve been fortunate to visit the Lourve probably 40 times since 1978. I always find time on each visit to go to room 711.

NFTs are subject to the same valuation influences as art. The Bored Apes Yacht Club NFT collectioncontains 10,000 digital avatars. Each Ape is a unique combination of 170 characteristics, including expression, headwear, clothing, etc. While each individual Ape is different, some are rarer than others. In fact, some traits, like golden fur and laser eyes, are so rare that less than one percent of all Apes have them. Earlier this year Bored Apes Yacht Club NFT sales on OpenSea exceeded $1 billion.

What Do You Really Own with an NFT?

In March 2021, Sina Estavi, CEO of Bridge Oracle, bought Jack Dorsey’s NFT of his first tweet for $2.9 million. Dorsey donated the proceeds to Give Directly’s Africa Response fund for COVID-19 relief. Estavi did not get ownership of the tweet, just of the token on Ethereum.

Some NFTs come with more expansive rights. The Bored Apes Yacht Club NFTs come with complete intellectual property rights. One owner created a music video with an ape. Virtual band KINGSHIP, made up of four Bored Apes, signed with Universal Music Group. There’s also a beer launched by an owner.

Most NFTs, however, do not include copyrights to the original image or file associated with the NFT. Larva Labs, the creator of one of the early NFTs, CryptoPunks, doesn’t attach IP rights to its NFTs. It apparently uses something called the NFT License, which allows using the NFTs for “personal, non-commercial use.”

As Anirudh Tiwari recently pointed out in Wave of litigation’ to hit NFT space as copyright issues abound:

As things now stand, brands and companies have begun to crack down against NFT projects that violate copyright, IPs and trademarks. On Feb. 4, Nike filed a lawsuit against StockX for trademark infringement on Nike sneaker NFTs. The sneaker company has lodged a 50-page long complaint that claims the reseller has sold nearly 500 Nike brand sneaker NFTs impacting Nike’s reputation and legitimacy. Additionally, the shoemaker has accused StockX of selling the NFT sneakers at inflated prices amid “murky terms of purchase and ownership.”

Even French luxury fashion house Hermes has recently had a legal confrontation with Mason Rothschild, creator of Hermes Birkin bag-inspired NFTs MetaBirkins. Hermes mentioned in its complaint, the “defendant’s MetaBirkins brand simply rips off Hermès’ famous Birkin trademark by adding the generic prefix ‘meta’ to the famous trademark Birkin.” In response, the creator compared himself to Andy Warhol painting Campbell soup cans in that he is making art from a well-known commercial image.”

The NFT ‘Right-Click’ Problem – Is It Theft?

A huge problem facing the NFT world is right-click NFT theft. You can create a copy of any NFT image simply by right-clicking your mouse and saving the image on your computer. As pointed out earlier, an NFT entitles you to ownership of the token recorded on the blockchain. Generally, you do not have intellectual property rights to the actual image. The challenge is that anyone can mint an NFT using a copied image, thus creating their own versions. Recently, OpenSea reported that over 80% of the NFTs minted with their free minting service were plagiarized works, fake collections, and spam.

NFT marketplaces can actually exacerbate this problem. When you create an NFT you ‘mint’ it on a blockchain like Ethereum. On Ethereum you have to pay a ‘gas fee’ These fees are used to compensate Ethereum miners for the energy required to verify a transaction and for providing a layer of security to the Ethereum network by making it too expensive for malicious users to spam the network. Gas fees are dynamic. They vary depending on the congestion and workload on the blockchain. Gas fees are expressed as Gwei, which is 1 billionth of an Ether. You can offer to pay more ‘gas’ to get your transaction confirmed faster. Here is a link to current gas prices to confirm an Ethereum. Gas fees for NFT transactions can be significant.

Many NFT marketplaces like OpenSea offer free minting of NFTs. ‘Lazy Minting’allows a creator to defer the cost of minting an NFT until the moment it’s sold to its first buyer. The gas fees for minting are rolled into the same transaction that assigns the NFT to the buyer, so the NFT creator never has to pay to mint. Instead, a portion of the purchase price simply goes to cover the additional gas needed to create the initial NFT record. The minting is not free – it is just deferred until the NFT is sold.

“One of the biggest problems NFT marketplaces are facing right now is that if they mint NFTs for their users and/or provide any level of curation, they are not shielded by the Digital Millennium Copyright Act (DMCA) and thus can be sued directly for copyright infringement by creators. The DMCA was passed in 1998 to implement the 1996 World Intellectual Property Organization’s Copyright Treaty and Performances and Phonograms Treaty. In part, it creates limitations on the liability of online service providers for copyright infringement.

Rossow believes that is an essential requirement for any NFT creator to highlight the copyright, trademark and IP implications of the NFTs they launch. He said, “The smart contract behind an NFT is what governs the rights on how it can be used. It would also make sense that the creator(s) behind any NFT project are crystal clear to their audience before minting on what rights they will have with the NFT once they mint and purchase it.”

Here are four of the more whacky NFTs from the past year:

One Calendar Year of Recorded Farts $736

NFTs have been around since 2014. It is estimated that there were $25 billion of NFT sales in 2021.  After surviving the DotCom bubble of 2000, the housing bubble (2008), and the Bitcoin bubble of 2018 are we witnessing the start of an NFT bubble? The $5 billion in OpenSea NFT sales in January 2022 may be the start of another bubble of epic proportions. If someone is willing to pay $736 for a year of recorded fart sounds, the sky is the limit.